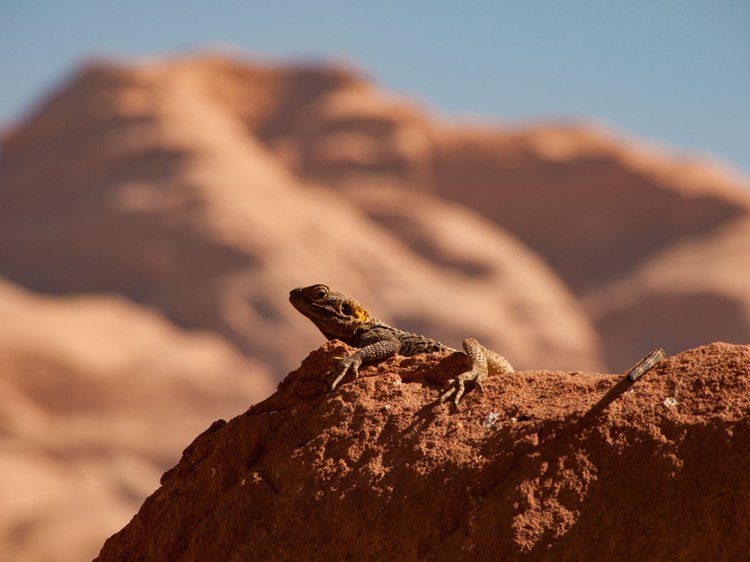 I’m sure there is someone out there who could identify this lizard, and probably tell you where I took the photo (Wadi Rum, Jordan).  The lizard’s life is pretty much like any other lizard’s life in any desert on Earth.  It eats bugs, gets water when it can, and escapes predators by losing part of its tail, which it then regrows.

It is pure chance that this lizard hatched where it did, in what humans call the Middle East, in a country invented and delineated just a century ago by exiting colonial forces.  It worked out well for the lizard.  It lives in a sparsely populated area, far from falling bombs and big cities and heavily trafficked roads. Just a few hundred miles north, and it would have been in the middle of a war zone, where humans, also born by chance into arbitrarily designated regional identities, fight over the petrolified remains of much bigger lizards who lived in the jungles which covered this desert millions of years ago.

The lizard doesn’t know how lucky it is.  It doesn’t even know that there is any world other than its own small territory. Humans, on the other hand, know.  Some of us are lucky enough to be born into prosperous, free countries whose wars are mostly fought elsewhere.  Most humans are not.  Most humans are born into poverty, war, and bondage of one sort or another. Many of those who, like me, are lucky, believe that they somehow deserve the advantages which have fallen to them.  Even I, who acknowledge the good fortune I had to be born here, am not willing to give it up. It’s not my fault that someone is starving somewhere.  Or is it? And, if it is, what is my responsibility to act?