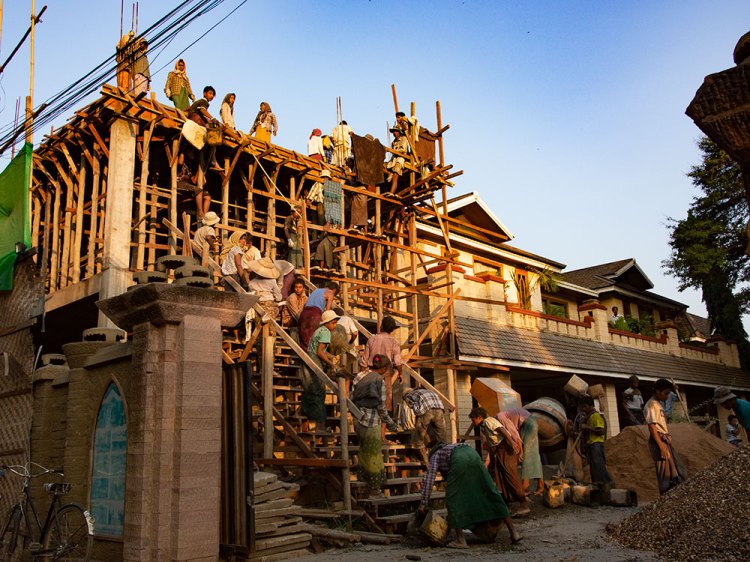 Another image from Bagan in 2013.  I count at least 32 people working on this construction site. Sand, stone, and cement are shoveled into the small mixer.  The mixed concrete is poured into plastic buckets, which are transferred hand over hand up the wooden steps and then lifted to the roof, where they are walked across and dumped.  The process is continued until the entire roof is poured.  I watched for several minutes.  I’m sure the roof took all day to finish.

I used to work concrete.  The same job would have taken 4 people.  One to run the pumper truck, one to guide the chute, and two to muck and finish the concrete. You could add one more to run the front end loader which filled the mixer truck at the yard.

There are a couple ways to look at this.  One is to say that there are less jobs, 25 people or so will be out of work.  Another is to say we can now build more stuff faster with the same 30 people, because it takes less per job.

It gets more complicated when you think about the fact that it takes no education to stand on a stair and hand buckets of concrete to the next guy, and significantly more training to operate a pumper truck.

I’ll bet the construction company paid less for all that labor than they would have for a pumper truck and smaller trained crew.  That’s good on a micro scale, possibly, but not so good for the macro economy.  Lower wages mean less buying power, so less money to build factories, shops, and homers, so less business for the construction company. That in turn means less tax revenue for the country to fund education and raise the workforce to modern levels.

I only got as far as economics 101 in school.  I was having too much fun with my friends.  I think I got the basics right here, though.  On a side note, the integrity of a concrete floor poured in one hour by a truck and cured as a unit would be far greater than that of one poured in little bits by hand.

I guess the question here is how does a country like Myanmar transition from doing things this way, which keeps everyone employed and eating, to a modern, more automated method which raises everyone’s standard of living.  There will be inevitable disruption in the labor force, as some people lose jobs because they lack training.  Then they become dependent upon the government, which costs taxes and results in pushback from people paying those taxes.

The problem with economics is that it all works very well on paper, with neat little graphs illustrating cause and effect, supply and demand, but as soon as you put humans into the mix it gets complicated.  You can’t quantify greed, incentive, charity, or laziness on a graph.