I was born in Ekalaka, in the South East corner of Montana.  Ranching country.  My dad was minister of the town’s Congregational Church, so he hung out with ranchers from the congregation.  He did rancher type things, like holding down the calves for branding (somewhere I have a photo of this), and, on occasion, going out to shoot prairie dogs.  Prairie dogs are anathema to ranchers, because both cattle and horses can break legs when they inadvertently step on a burrow.  He had a rifle he used for that.

He also had a shotgun that he used for bird hunting.  We ate grouse, pheasant, and duck.  One time we had a goose.  I remember fishing the shotgun pellets out of my grouse or pheasant soup, although Mom always seemed to arrange for most of them to end up in Dad’s bowl.

My dad used his rifle to go deer hunting one time.  He hit a deer but didn’t kill it.  He told me that the look in the deer’s eyes as he made the kill at close range was heartbreaking.  I don’t think he ever hunted again.

He did keep the rifle, though.  I don’t know about the shotgun.  About eight years later, we were living in suburban New Jersey, on a hill overlooking New York City.  My mom had a garden, as she has for all of my life.  Our house backed up on a wildlife preserve, which was great for us kids.  It also meant that the garden was plagued by woodchucks.  My mom tried everything, from traps to chicken wire, with mixed results.  That year there was a particularly wily critter who avoided all of the traps and broke through the chicken wire.

My dad’s parents were visiting, probably for either my birthday or my sister’s, when the woodchuck showed up, brazenly munching down a row of lettuce in the middle of the day.  My grandfather looked at my dad and asked, “Do you still have that gun?”  “Yep,” my dad replied, and they fetched it from its storage place in the basement.

We lived on a long, skinny, hillside lot, with a driveway running up to the house, which faced the view of the city rather than the street.  Opposite the garage was a long back yard, the furthest third of which was Mom’s garden, bordering on the woods.  My grandfather came out of the garage and braced himself on the corner of the house, at least 50 yards from where the woodchuck sat munching arrogantly away in the far corner of the garden.  He took one shot, probably his first in years, and killed it instantly with a bullet to the head.  We were all impressed, but we didn’t cook and eat it.

I was going to boarding school in Vermont at the time, and I spent part of the next summer working on a new art building for the school. When I got back in the fall, I found out that one of the older kids I had been working with had walked out into the woods, put a shotgun in his mouth, and pulled the trigger.  To this day, I don’t know why.

I have a hazy memory of shooting a 22 rifle at bottles in the desert, maybe when I lived in Phoenix.  It was fun, I guess, but not all that fun.

Once, while working as a concrete laborer in Phoenix, I was threatened by a loony with a gun when we got some water spots on his car.  I still didn’t remotely consider getting one myself.

When I worked as a cellular technician, one of my coworkers and I bought paintball guns and stalked each other through the orchards around the Salton Sea.  That was fun, but I always lost, splattered with neon orange or green.

I have traveled all over Mexico and Central America.  Guns are everywhere down there, but always in the hands of military, police, and security guards.  I saw shotgun wielding bulletproof vest wearing men guarding everything from a truck delivering water to a Burger King.  Young kids with M-16s asked me where I was from and where I was going at Puestos Militares throughout Mexico.  I never saw a civilian with a gun.  Even when I was in Juarez in 2009, at the height of the gang war there, I never saw a gun that wasn’t carried by a Federale.  Obviously, there were a lot, 15 people were shot and killed every one of the four days I spent there, but no ordinary citizens, just gang members and cops.

Here in Tucson, I see holstered guns on civilians almost every day, and assume that there are many more concealed weapons.  They are carried by people who are frightened of everyone around them, people who fantasize about someday using their weapon to be a hero, and by people who just want to make a political statement.  They are guns which can unleash a volley of bullets rapidly in the general direction of a perceived threat, or capriciously gun down a Congresswoman and several of her friends and colleagues.  I doubt that most of the people carrying them could drop a woodchuck at 50 yards with a single shot to the head. 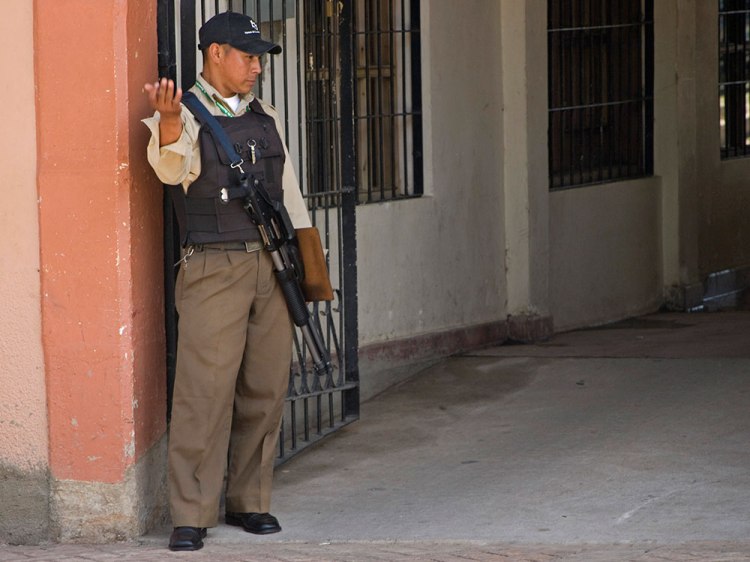